Craig is an honest geezer just rang up asking about a certain new make of detector he said they were..

Big thanks to Joe who sold me the Equinox 800, he went through all the operating instructions, bough.. 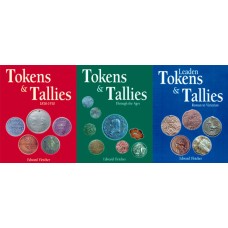 Tokens & Tallies Through the Ages

There is no universally accepted agreement on what is or is not a token, nor even a tally. In this book the terms token and tally mainly cover those metal objects for which there is some historical or archaeological evidence that they served either as substitutes for denominations of legal money in short supply, or as a means of recording promised payments and services due, or as a method of keeping account of time, of possessions, of work output, or of the many other things humans felt a need to count and record. The accompanying texts and illustrations serve as an introduction to each category. The recommended bibliographies should put readers on the road to expertise in all of these fascinating series.

The massive social changes that took place during 1850-1950 are reflected on the designs of the small pieces of brass, copper, lead, plastic or embossed card used in the manufacture of these intriguing items of paranumismatica, with issuers ranging from public houses to chapels and co-operative establishments. With over 700 photographs covering much of the range of rare and not-so-rare tokens available to the collector, this book is an invaluable source of information to both the beginner and experienced collector alike.

The text ranges far and wide to tell the stories; the photographs show several hundred images of leaden tokens and tallies from every age. They cast much needed light on a group of collectable artefacts about which little has been written until now. This book is the third in Edward Fletcher's popular Tokens & Tallies series. 780 illustrations.

All titles by Ted Fletcher