Thanks again for excellent service Ordered on Sunday night received on Tuesday.. I never got a f..

Ordered by post on a Monday. I did not expect it until Thursday at the earliest. But I was playing w.. 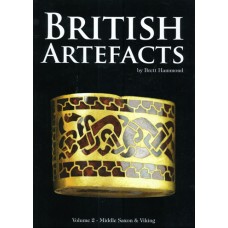 The first volume in the series dealt with the early material from the Adventus Saxonum through to the middle of the 7th century when the process of conversion to Christianity was underway.
This second volume covers the Middle Saxon material, including the impact that the Vikings had on Anglo-Saxon life during the period of the Great Army, the resistance of King Alfred, the Danelaw and its reconquest by Edward the Elder, the Kingdom of York and the formation of England under King Athelstan.
The chapter headings sum up the contents:
The Middle Saxon & Viking Period;
Runes & Roman Script;
Artefact Production & Distribution;
Art Styles;
Advice for Collectors;
Advice for Finders;
Metal Artefacts – including brooches, buckles, strap ends, fasteners & tags, pendants, mounts, rings & bracelets, weapons & fittings, ecclesiastical & liturgical items, gaming pieces, weights, keys, tools & utensils;
Non-Metallic Artefacts; Anglo Saxon & Viking Burials;
Middle Saxon & Viking Kingdoms

All lavishly illustrated with nearly 400 beautiful colour pictures and maps.

The book is laid out logically with preliminary discussions of the history, and of manufacturing and distribution as well as advice for collectors and finders; there follows a brief outline of the scripts, Roman and runic, Anglo-Saxon and Scandinavian. The art styles are discussed in some detail, then follow the metal artefacts by type, followed by the non-metallic material such as glass, amber, bone and horn. The burial traditions – inhumation and cremation, Viking and Anglo-Saxon – are handled succinctly in a few pages with typical grave plans. Scandinavian settlement is dealt with as well as the Middle Saxon and Viking kingdoms. Finally the summary data for the images are tabulated, followed by a glossary, bibliography and index.

The book covers the subject brilliantly, offers a great breadth of material and manages to spring a few surprises – it includes a unique gold finger ring bearing the name Cynefrid, a gilded Irish mount and some spectacular swords.